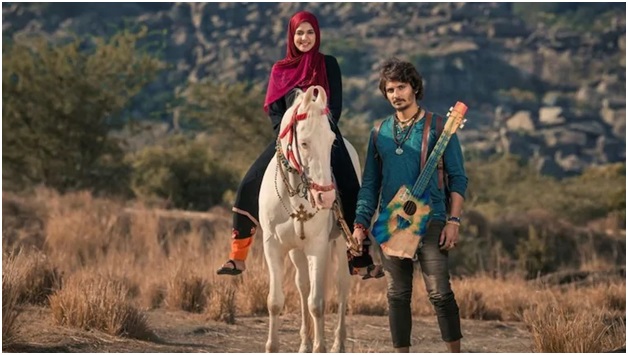 Aha is a platform where you get entertainment packages of all genres not just movies; it even has trendy shows exclusively for the Telugu prajalu including subscribers and few vintage old movies for non subscribers too.

Where to Watch online:aha video

The story starts with the Gypsy(Jeeva) parents murdered in terrorist conflicts. A nomad who witnessed the destroy achieved Gypsy. Horse was used as their means of travelling on a daily basis, Gypsy has learned playing guitar, making horse shows from the nomad who called as a senior.

Gypsy impressed many people of different locations and was also very helpful with kindness and smartness. One day senior expresses about the things he missed to do and tells Gypsy to find someone special and have a companion in life who stays life long with love. The next day the senior passes on, Gypsy with his horse(Chai) gets back to his normal life and starts his job.

Unexpedly he falls forWaheeda (Natasha Singh), a girl who grows in a house where she has huge restrictions. Even Waheeda likes Gypsy. What all the consequences did gypsy and waheeda have faced? How did they overcome the situations?

All Telugu prajalu can access the Aha OTT. Watch your favourite videos and movies today!

Gypsy is a thought provoking film. Every shot has a hidden meaning behind it. There is no wastage of cast or something called as an extra scene.

This film cannot be put under one genre, it has got mixed factors like love, betrayal, politics, humanity, inhuman nature, and so on.

Every factor contributes its level best to entertain and to make us think and rethink. Jeeva has once again proven himself a versatile actor.

Intermission shot was something which  can never be forgotten and can never move away from anyone’s eyes. On the whole, a must watch thought provoking film. Kudos to the entire team of gypsy.

Future Of Work In India: Pros And Cons Of The Digital Divide...

How to Use Church Texting for Betterment of...